This post is the third in a series in which we consider how our approach to industrial safety, and process safety in particular, may change in response to the COVID-19 pandemic. It is early days — no one knows what the ultimate health and economic effects of this frightening event will be. But it seems likely that we are entering a ‘New Normal’. So much has happened so quickly that it is hard to visualize how we can return to the ‘Old Normal’. All of us wish for a quick, V-shaped recession, after which the economy comes roaring back, more vibrant than ever. But, as discussed in the first post, The New PSM Normal (1) — Deflation, it seems more likely that we are entering a period of long-term deflation, possibly leading to a Depression such as took place in the 1930s.

There has rightly been much discussion in recent weeks to do with the pandemic and its direct effects. Not only have many people died or suffered from severe illness, we can be sure that more suffering is on the way. The actions that we have taken so far, particularly physical (not social) isolation and distancing, have helped slow down the rate at which the disease is spreading. But such actions cannot actually stop the spread; unless and until a vaccine and/or a cure is found, more and more people are going to be stricken. We are all vulnerable — no exceptions. It’s not a question of “if”, it’s a question of “when”.

But people in the process industries are also aware of a second change that has been creeping up on us, but that has suddenly (and ‘suddenly’ is the operative word in our New Normal) become its own crisis. I refer, of course, to the collapse in the price of oil.  For the last five years a barrel of light, sweet crude has been in the $50-60 range. But now it is down to $12, and we hear stories about traders actually paying to have the oil taken away.

At first, it all seems to be quite simple. The low price of oil is directly related to the pandemic. The logic is as follows,

There are complicating political factors. The Russians and Saudis are seemingly engaged in a price war in order to control market share. But their real agenda — to drive the U.S. shale oil industry out of business — seems to be going according to plan.

It also means that the concerns that were expressed about ten years ago to do with Peak Oil were wrong. We are not running out of oil — indeed the opposite seems to be the case. There is a surplus of crude oil; only if we return to the ‘Old Normal” will prices rebound.

Most of the discussions to do with the economic woes of the oil business have been to do with the fall in revenues linked to low prices. But it is the cost side that should receive more attention. What is hurting the oil companies just as badly is that the cost of finding and developing new sources of oil is high and is steadily rising. These costs are not driven by political or social issues such as the Russian/Saudi agreement; they are driven by the laws of physics and the realities of geology.

What we are learning is that

Crude oil is a finite, non-renewable resource. We have picked the easy, low-hanging fruit and now exploration and development costs are rising inexorably. Consider the two pictures shown below. The first is of a Texas oil well about 100 years ago. The oil was near the surface, under pressure and easy to extract. All you had to do was “stick a straw in the ground”. The second picture is of a modern offshore oil platform — it operates in very deep water, and the oil is thousands of feet below the mud line. Needless to say, finding and extracting this oil is very expensive. Eventually there comes a point where the energy company cannot make a profit.

It might be thought that the energy companies, as their costs increase, could simply raise the price of their products such as gasoline and petrochemical feedstocks so as to ensure that they make a profit. The catch is that energy, particularly the energy provided by oil, is utterly fundamental to our entire economy. If the prices of oil products are increased too much, people cannot afford those products, demand falls, and so prices fall. We need to find a Goldilocks price for crude oil. That price is not too hot, and not too cold. It needs to be high enough for the oil companies to make a profit, but it needs to be low enough for the economy to function properly. But we are having trouble finding that Goldilocks price, as discussed by Richard Heinberg in his 2015 post Goldilocks is Dead.

If the above logic is correct then the process and energy industries will be facing particularly severe economic challenges. Process safety professionals will need to adapt to those challenges.

A more fundamental way of looking at the oil price conundrum is to use the concept of Energy Returned on Energy Invested (ERoEI). It takes energy to find and develop new sources of energy. If we use most of our energy simply finding and developing those new sources of energy then the oil companies cannot make a profit. They are constrained not by political and social events, but by the basics of geology. 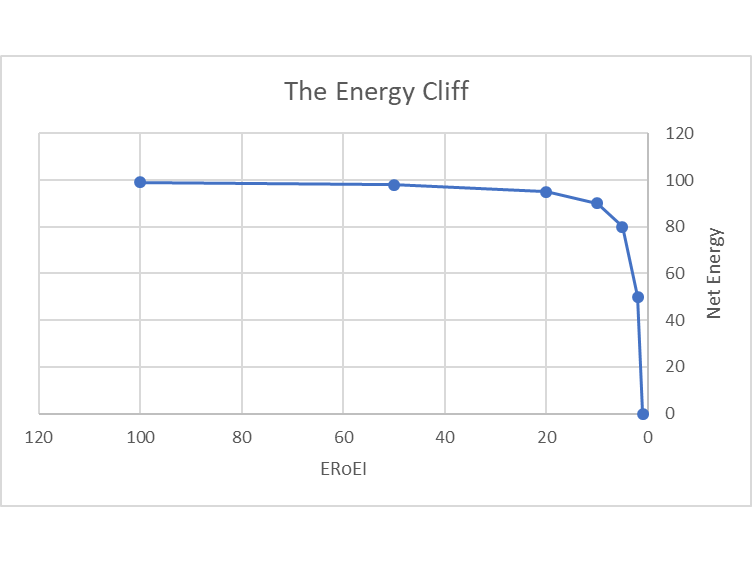 As time permits, we will discuss ERoEI in greater detail in future posts. We will also look at the “ERoEI Cliff” — the point at which there is no longer any justification for developing new sources of oil.

We are publishing another set of weekly posts for people of faith and the New Normal.  This week’s post is The New Normal (5) — Change Is In The Air.